It is hard to believe that December already has passed and it’s the middle of winter. In Barcelona, ​​with almost daily sunshine and clear skies, it hardly feels like the December I’m used to know from Germany. Anyway, this month, compared to the previous months, I’ve been more concerned with the tasks that needs to be done in the background of my project. For example, I’ve worked on the designs that will serve as a template for the resumes. In addition, I have made further changes to the form, which the customers will eventually use to convey their information’s. In addition, I have informed myself, which legal information’s I have to consider, when I want to start my project, such as the imprint on the website. Here also Maria could give me some helpful advices. 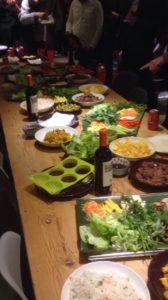 On the other hand, at my work for Lemongrass, December was a bit more stressful than the other months, because many customers wanted something before the Christmas break, so there was plenty of work to do. Nevertheless, there were also relaxed moments, such as the Christmas party, which took place in the middle of the month. There was a kind of Vietnamese buffet, where everyone could create their own „Vietnamese rolls“ with self-chosen ingredients.

In total, the December was another exciting month, in which I received many new impressions and gained new experiences.